Being a repo man has it’s hazards. This article makes that very clear. 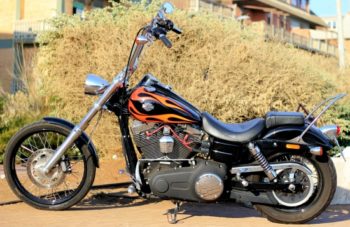 STAFFORD — A repossession attempt went bad on Wednesday when police said the owner of a Harley Davidson pulled out a gun.Michael Arnold, 46, of Manahawkin, is now facing several assault and weapons charges. Police said Arnold pointed the gun at the the repo man, who was wearing a GoPro camera on his head, and ordered the man to get off his Mermaid Drive property and leave the camera. The man handed over the camera and drove off to meet police as Arnold went into his garage, according to police. Police said Arnold then left his home and headed to his girlfriend’s house on nearby Nautilus Drive, where police found him.

He told police that he had left the gun behind at his own home, where cops said they found it. Arnold was charged with aggravated assault, making terroristic threats, unlawful possession of a weapon and possession of a weapon for an unlawful purpose. He was held at Ocean County jail with bail set at $50,000. Police did not release an arrest booking photo of Arnold. CORRECTION: An earlier version of this article listed the wrong crime the suspect was charged with.